TNGA was super hard.
Being brought back down to Earth is good for you though.
I was plauged with problems before the start.  Weak front brake(despite a quick if sloppy bleed), leaky camelbak, and no Henry the Big Green Engine.

Right off the bat I missed a turn, fortunately I wasn't the only one, Shey made the same mistake.  After that mistake I wound up riding with Cricket, Jeff, Ruth, and Charley.  I probably would have quit had Cricket not been there.  The course was not easy to navigate, and almost every turn required a discussion and a quick search for previous tire tracks.  The roads were not well groomed and very few climbs could be done out the of saddle, due to the loose rocks.    We did 60 or so miles the first day, and luckily found a little marina with a short order kitchen for dinner.  I spent the first night only getting a few hours of sleep due to the cold wind(no sleeping bag).

The next day was a little better, but not with out mishaps.  We had to go down an old abandoned road with barely a trail on it.  Lots of down trees and freaky spiders(really freaky!).  Everything was going fine until I came to an abrupt halt.  There was downed tree hiding behind a bush, it jammed into my left ankle and threw me off the bike.  nothing on the bike was broken, but I feared I wouldn't be able to ride.  I lucked up and it didn't hurt to ride, and soon I didn't even notice the injury.   Karlos caught us in Helen after getting lost, getting a flat, losing his pump, and buying a pump off a roadie.  We began a huge road climb in the noonday sun, and soon lost Karlos, but caught Jeff and Ruth who skipped the grocery store for a gas station.  After that climb we got to rock downhill for a bit.  I broke my previous record and did 51mph on a loaded mountain bike(on asphalt).  Scary and fun all at once.  Cricket and I kept our normal pace and talked about hiking, biking, 2011 TD, and car racing(She used to race a 911).  We decided that in order to get back to work on Thursday we'd have to leave Ruth and Jeff and start riding a little faster.  Jeff and Ruth had already proved themselves as competent bikepackers by that time.

Cricket and I had an early start, and were thankful we did not continue on into the night like Karlos had.  The road was freshly bulldozed and was sandy and rocky, not fun at 6am, or 9pm.  We made good time and found a nice quick stop that was open and serving delicious biscuits.  We had breakfast and Cricket grabbed lunch to go.  The next convenience store was close, but they had a working spigot so we lunched there.  At the next stop we caught Karlos again, but soon lost him on the road.  We hit our first bit of single track, and it was not easy, lots of pushing, and double checking the GPS.  One turn took us about 30 minutes to find.  A good chunk of the trails were pushers, which made me worry about the Pinhoti sections that were coming up.  I was starting to realize that I'd be cutting it close, with a 5+hr drive home and work on Thursday.  I managed to hit a soft spot on the edge of some single track and flipped and hit my head.  Luckily I did not crack my helmet. Per the usual I talked about quitting, but Cricket would talk me out of it.  We hit the Pinhoti section east of Mullberry, and it was beautiful.  A good part of it was an overgrown road with just a bit of single track on it.   It was nice and smooth, and there was a good early evening/late afternoon breeze.  We rode on into the night, only to be caught by Karlos.  He was headed to Mullberry gap for a meal and sleep.  We planned on skipping it as to not get caught up in a vortex.  We marveled at the stars for a bit and rode on. I complained that I was running out of gas, and would look for a good spot to bed down.  Not long after that I snapped my left pedal. 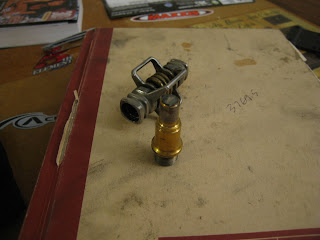 I was done, even though I had spares at Mullberry, I just didn't want to go on anymore.

That night was the best nights sleep of the trip.  I woke up said good by to Cricket, traded my Chamois butter for her garbage and she was off, I went back to bed.  I one legged it about 4 miles to Mullberry, grabbed a meal and headed to Dalton to find Cricket.  She flew through Dalton, I probably missed her by about 30-60 minutes.
Lesson learned, light weight parts for XC only, heavy stuff for touring/bikepacking.
Posted by Stephen at 21:22 No comments:

TNGAI'm just wrapping up my cue sheets at the last minute.
gotta pack up and head south.  hopefully I won't get lost or something horrible.
I want to go fast by myself and try out new strategies for the 2011 TD, but I might wind up taking it easy with a group.
spot should be here: http://trackleaders.com/tngai.php?name=Stephen_Huddle
Posted by Stephen at 22:45 No comments: