I'm starting to make a pile of stuff for the TNGA.
Hopefully I'll have a new rim for my front wheel and have it all built up by Friday.
Tracking should be here somewhere, and call-ins here.
Posted by Stephen at 21:38 No comments:

This is going to be lazy.
JB was fun.
I started off for a bit, until Marty passed me somewhere on the first bit of single track.  On the second bit of double, James passed me along with two others.  I followed James for a bit then he passed the guys infront of him and picked up the pace.  I was dropped.
I don't remember much after that.  I had to stop for a real "pit stop" *wink wink*, and I had to sit down and eat some Cheetos and a sandwich or two.  I guess I'm still in divide mode, hunger beats all other desires.
The best part was listening to Butch sing Angel of Death while running full tilt.  I think I'll start every race with some Slayer.
The Rogue camp put everyone else to shame too.

Oh and I have a new fancy Sella An-Atomica saddle, with new chromoly rails.
Posted by Stephen at 19:34 No comments:

Gearing up for jb 6 hr and Versailles 24hr

Got the Serotta back too 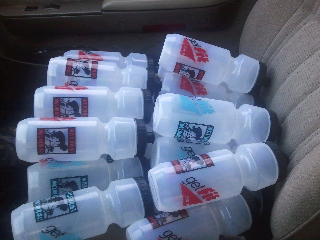