I'm a nerd. I calculated this from the 2008, 2009, and 2010 grand departs. I didn't do ITTD. I calculated the 2009 and 2010 scratch state based on the last time in the split charts; unless I personally remembered. For 2008 I went through the call ins.
As I thought most people didn't make it out of Montana. Idaho is a low number due to the short time spent there.

I'm not quite sure how I feel about the large number. I'm pretty sure an event like the TD will not attract schmucks. Sure someone might rub people the wrong way, but I doubt it will be like some of the people one could run into on the AT.

I remember a literature teacher telling me to write a poem in the style of some poet(not Shakespeare). I argued with him about that, saying that poet didn't have anyone to inspire him/copy, and we should just learn on our own. Well....he may have been onto something. I will try and emulate the frame bag Eric made for me. That might be a better way to learn. His bag is incredible, I can now appreciate the work he put into it.

I skipped the second weekend of Harbin Park Riding Dirty Winter Time Trials which was a damn good idea. -4 degrees, no thanks.
This past weekend's was fun, I improved my time by 6 minutes even with the icy permafrost on the second lap.

I went to the Ride the Divide screening in Dayton OH last week. Great crowd, lots of people and they cheered and clapped during the movie. Mostly for Mary. The Q&A was fun too, lots of good questions. I am scheduled to show up at the Louisville KY screening, but with the icy weather coming in; I may have to pass.

I have been working with Garry though to bring it to Cincinnati and Knoxville. So far a venue has been picked for Knoxville; just need to make arrangements. I'm waiting to hear about a venue in Cincinnati.
Posted by Stephen at 21:01 No comments:

I am a long ways off from the quality of the pros.
But I enjoyed it(until the last seam) and I will continue to practice. 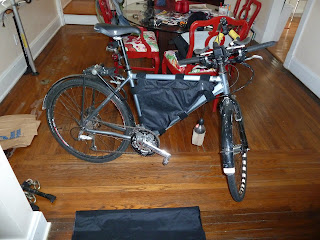 It's official. My manager is ok with me taking a leave of absence. I have started the process with HR and I'll probably have it all squared away this week.
Posted by Stephen at 14:32 No comments:

Fantastic time out in the cold Ohio tundra.
There were 50 riders out for this.
The course was just a hair shorter than the summer time trial.
I love riding familiar trails in the snow, it's other worldly.
I was tripoding around most corners; riding single track in the snow takes a little bit of finesse, and a lot of rear brake.
The second lap felt a bit faster than the first, since the trail was flattened out, but the turns were torn up. 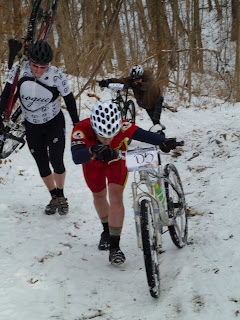 Butch's expression says it all.
Posted by Stephen at 14:56 No comments:

Woooo! 2nd best Christmas present(after my brother's).
I'll have to get some cheap fabric and start making some frame bags for practice. 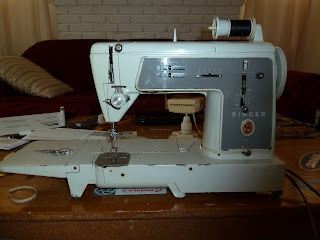 Well I gave the homemade snow tires a try and failed.
I hit a small patch of Ice I guess and fell over, nothing major.
I'll be bussing it tomorrow. I'm sure I'd be fine riding on the major roads down the stripe cleared by all the cars, but I don't want to risk that.
People are bad enough when it's not snowing. 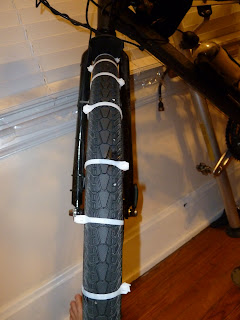 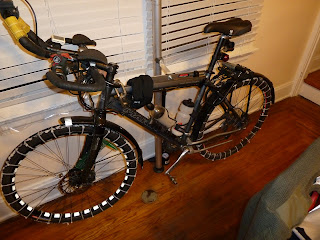