That's right people, step right into the wide world of neurosis.
I am worried about my knees and thighs.  They ache right now and I think my IT band is a little wonky.  The left knee hurts a bit too.  I'll have to stop riding, but then I'll be out of shape(running!=option).  So I have to wither away, and maybe even miss the Cohutta 100.
I am also worried about my bike(in two ways).
1. it will be damaged on the flight to Canada.  I have a lay over in Texas, and I'm worried on either leg they could load it the wrong way up.
2. there was some damage to my bike from my feet rubbing.  It's on the fancy carbon fiber.  Some of it wore off amazingly enough(or not).  Well one shop said that it's not covered by warranty(understood), and the guy said it was worn paper thin; to my surprise.  It's not that bad, but it's still something to be concerned(needlessly?) about.  I did measure it though, about 2 millimeters was worn off.  To some people that's a lot(lots of people are touchy about carbon), to me that's not much.  But I am about to put 3000+ miles on it(cohutta 100, mohican 100, TD, plus training etc).  Hopefully Jaques can patch it for me.

Ok well now that I've typed all that, it doesn't seem too bad.

There is always beer and duct tape!
Posted by Stephen at 17:55 2 comments: 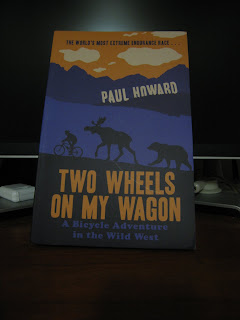 Paul's book Two Wheels on my Wagon was on my door step.
Yes I did dance around and giggle like a little girl.
I cackled at quite a bit as I paged through it.  There is even and excellent group photo of Me, Paul, Per, and Trevor. woo!
I'm looking forward to reading it many times over.

I have the latest maps.  The updates aren't that much compared to my cue sheets.  I'd like to return them, but it is best to err on the side of caution.
Things to buy:
200$ canadian
new sunglasses lenses
5l dry bag
chamois butter
computer mount
leatherman squirt p4
rite in rain journal
silnylon mits
and I think that's it for the non bike stuff(from REI).
I've got a big list for TVB and Oakley cycles.

I think I'll just ride 3 days a week to nurse my knee back into shape.
Posted by Stephen at 22:22 2 comments:

I have been slowly amassing parts and supplies for the TD.
I just bought 3oz of ibuprofen(~270). Too many I should say; I think I'll halve it and buy what I need in Steamboat.
I have the latest maps, and I'll be updating my cue sheets from last year. I've got a list of things to buy from REI, and I need to make a list of things for TVB soon.
Right now I'm icing my knee, which has been hurting a bit.
Posted by Stephen at 21:33 No comments: