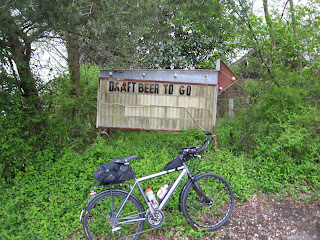 I had plans to go from my house to Clingman's Dome for about 116 mile round trip. Tim from work, was thinking about going, but he bailed on the last minute. So I loaded up the bike with the epic saddlebag, the fuel tank, and I grabbed my camelbak. 116 miles seems big, but I divided it into bite size chunks of about 16 miles. Just like on the AT if you divide it up, it seems easier. So I just set mini goals for myself throughout the ride. First I made it to Townsend, TN. Then Sugarland's visitor center. After that I began the ~17 mile climb to Newfound Gap, NC; with the intention of continuing another 7 miles to the top of Clingman's Dome. The weather wasn't that great though. It was foggy, and getting colder the higher I climbed. It wasn't hard though, I managed a nice 7mph pace. With about 2 miles to go(to Newfound), I almost gave up, because it was cold and foggy; but decided to continue on. And sure enough I made it! 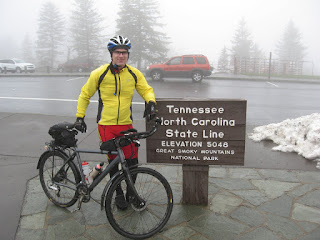 It was about 38 degrees. I chatted with a couple of AT thru-hikers, and then immediately high tailed it out of there. I was starting to shiver. I haven't been that cold for a while.
The descent was not as cool, and by cool I mean awesome, as I had wanted. The fog was much worse, and the road was very wet. I managed a nice 35mph pace downhill, and hit a max of 41mph. I took a decent break at Sugarland, and continued on home, with out too many issues.
The climb up my street was the worse!
So one goal down, now it's off to Charlotte NC for an interview. 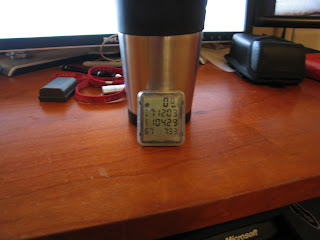 Looks like the same weather we had on foot in 2007. Terrapin Flyer