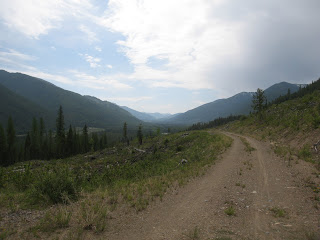 Later start than the previous day. Jacob ditched his aero bars and setup his gear between his handlebars and saddle. That would last him the rest of the trip. Long Long very hard climb followed by the new single track, which was barely a hiking trail. Unique none the less. The hike-a-bike section was the pits! Something I would expect on a jungle trip. Damn near vertical climb, with no switch-backs, and the icing on the cake; it was went/muddy. After that our new queue sheets said we would crest a climb and descent to highway 93. It did not say how long. We assumed it was short, but that couldn't have been further from the truth. My cyclometer was on the fritz so I don't know how many miles I did that day. 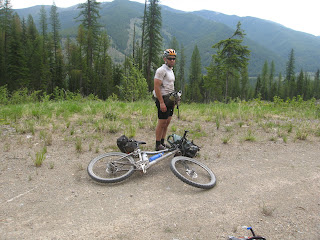 After the climb was a long and windy downhill. I loved it! I think I did 43 or 45mph. But I damn near ended my race when I went around a corner too fast and flew straight over a ditch into a field with stumps and downed trees. No damage though. Plus Jacob caught up and was befuddled to see me climbing up hill! Flew into the border. I couldn't have been happier to see the welcome to the US sign. 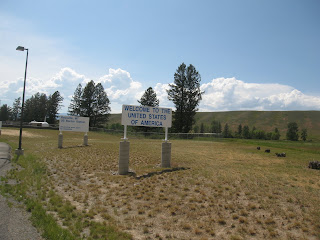 The guard power tripped on us because we ignored the stop sign and rode right up to his booth. Had lunch and bought dinner. As we were leaving a storm was rolling in, but we continued on to the grocery store and further down the road. But once we saw more lightening and a nice face full of wind, we decided to call it a day and stay in a hotel. I'm not sure how many miles we did, I'm estimating 71. Kinda disappointed about doing a short day, but happy to be dry.
Posted by Stephen at 20:41