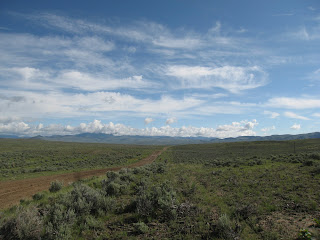 Muddy muddy muddy.
We hauled ass down the road, but as soon as we hit the Lewis and Clark Trail we hit some awful mud. Very thick and sticky. I could only push the bike for a bit, stop scrape of mud, push some more, rinse repeat; ok there was no rinsing. 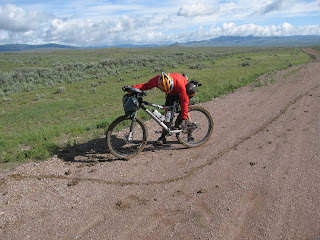 Did that for what seamed like hours. Trevor had the worst of it, everything would cake into his v-brakes. 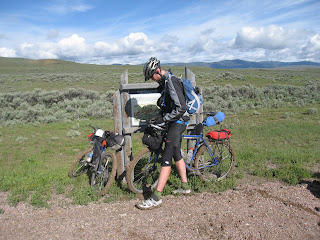 After a while the mud cleared up and I pedaled ahead and stopped at Cross Ranch to ask about the next town. No store or restaurant. But the guy was nice and let me wash my bike off and get water. 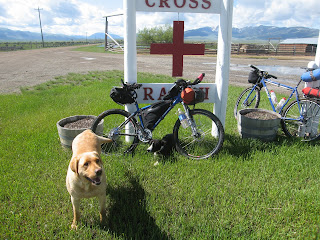 Everyone else showed up but Jacob. We washed up and then Jacob came in with a broken derailleur and hanger. After making a call to his wife and thinking about quitting, he made the bike single speed. It didn't work too well. He could pedal fast, so I rode with him at 8mph. His chain would go up and down the cassette and then finally it locked into a gear. Then we started a short climb and bang! His chain broke. He replaced the link and we started walking. Next thing I knew, he was waving down an suv and asking where they were headed. They gave him a lift and we said goodbye. I hauled as much ass as I possibly could. Even with a headwind I made good time. I actually freaked about some rain and backtracked to see about taking refuge in a barn. I changed my mind and kept on going. I passed Ray just before the real bad mud. That was much worse. At least it was mentioned in the maps. By then I was out of water and there were no good spots for water. I walked through the mud and could just barely see, Trevor, or Paul, or Per at the next climb. Amazingly enough I caught up to them at the top. They were impressed. Hell so was I. I put on my warm gear as the clouds rolled in and we bombed downhill. It was cold and wet, but not that bad. The last seven miles on pavement were agonizing. We made it into Lima before the restaurant closed and got a big room, and washed up real quick. Kricket was in the restaurant. She was finishing her day off. We decided we should all take a nice break and let the roads dry out. 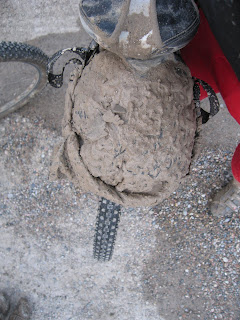