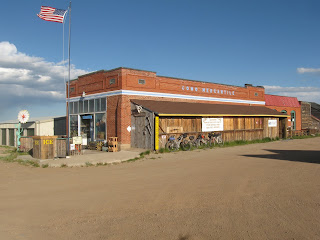 Long climbs in the morning. I hate the fact that I sweat so much. Lots of mines and what not. Silverthorne was too busy, but it was a nice easy bike path. Breckenridge was a little worse I would say. Like Gatlenburg, minus the Jamboree of Bears. Also no cell service. Had a nice lunch and of course I ate too much before climbing Boreas Pass. Which would have been fine had my stomach hurt so much. I also didn't acclimate well and had to leave, it was my first time at 11,000+.
Made it to Como and found Cricket, but she was not feeling well/was asleep in a closed B&B. Paul left her a note. She left the race from there.
We stopped a lady who said we could camp in her cousin's yard, but they were not home, so we slept in the Winwood playground. It was practically abandoned, and for some reason I slept in the concrete bathroom and damn near froze on the cold floor.
Posted by Stephen at 20:18