Rough day.
My sleeping bag was wet from sweat. I'm a sweaty guy. Like a fat dude trapped in a small guys body. I was worried about getting wet at night. Just sleeping in a bivy with a down bag worried me. Didn't want to dye of hypothermia.
The ride to Helena was hard. My hamstrings were sore real bad in my right leg for some reason. We still made it in decent time. Stopped at one of the bike shops there. Not a bad place. I wrenched on my own bike while Jacob and Trevor had the shop work on theirs.
The shop directed us to a burrito place. Casa Del Sol I think. Huge burritos! The best part of all was the price! Free! The owners(we met them later) were big fans of the race and had been watching. The other crazy thing was I met someone from Knoxville. I forgot her name, but she's an art professor at UT, and friends with Scott from the Tomatohead.
We headed out and I bitched and bitched about my legs.

We got a little lost for a bit and had to night ride into Basin.
The maps said there was a hotel, but of course it was closed or gone, or probably didn't exist.

The bar was open though! 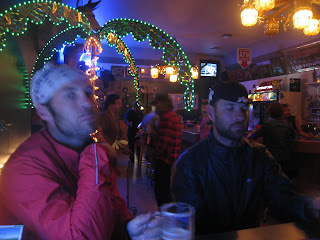 We went in and asked about a place to stay. The bar tender said there was none, but we sat down and had a beer. She made a few phone calls, and had the cook come back and make up sandwiches. She was a saint! Turned out she was a wilderness firefighter course instructor. She set us up in the "big house" which was a bunk house for the firefighters. 4 mattresses! It was one of the oldest houses in Basin and right on the trail.
I took a sponge bath and went to bed. 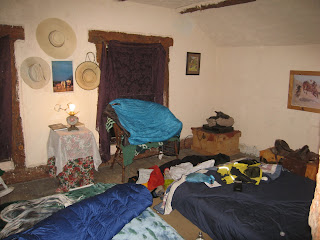 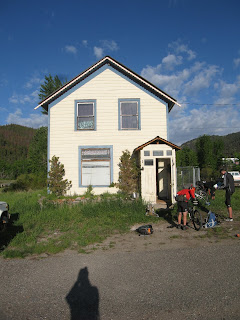