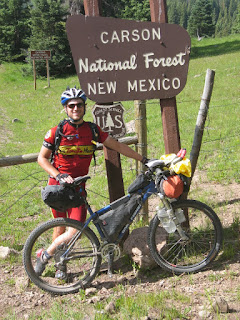 New Mexico!
Happy 4th of July.
Per and/or Paul wished me a Happy Independence Day which was quite nice.
Apparently the thing to do in New Mexico on the 4th is ride around on quad bikes and haul stumps. Per and Paul thought that was funny. About mid day my knee starting hurting pretty damn bad. I even cried climbing one hill. It felt like my knee was being hit by a hammer just below the cap. 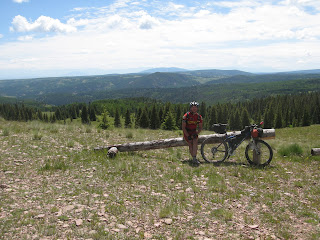 Nasty mud(even worse when wet) between Vallecitos and El Rito. Of course everything was closed on July 4th. We pressed on toward Abiquiu, stopped by a bar to ask if they would call ahead. The bar tender said they would probably turn us down right then. Paul, Per and Trevor hurried on towards the hotel/restaurant. I followed as fast as I could; crying the whole way. It hurt big time. I came in the lobby as the clerk was on the phone talking about our potential room. Fortunately someone canceled. I slammed my credit card down and said "We'll take it! I don't care what it is", and joined the rest for dinner. I thanked them for getting there before the restaurant closed. Thus began my demise.

I ordered the quesadilla instead of the tortilla soup. I think that's where I went wrong. We all had a main course and desert. It was divine(the first time).
Posted by Stephen at 20:26